The Blazing Times has been suspended due to lack of ability to facilitate the event side of BlazingWashington and a new publication at this time. The goal has been set to re-calibrate and relaunch The Blazing Times when structurally sound down the road.

In early April, BlazingWashigton.com made the decision to take a six-month break from the public side of the industry and retool behind the scenes. The idea for a monthly newspaper to capture the positive stories behind the industry was turned in to a reality with the launch of The Blazing Times in late October.

We officially will go to a monthly edition in January. Throughout November and December, we will prepare for the first monthly edition along with marketing, advertising, and distribution logistics.

Pick up a copy in the following stores. We are currently in 39 stores with the goal to increase to 50 by the end of November and into 100 stores by the end of January. 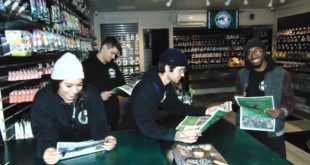