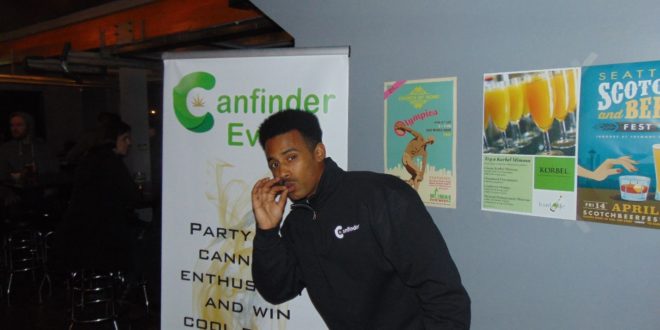 Interview with Canfinder’s DJ and Spencer

The Canfinder App was launched in 2016 and has evolved into a unique tech-related cannabis entity with a strong growing presence in Washington and throughout the nation.

Along the way, brand ambassadors DJ and Spencer joined the team with the goal of bringing the cannabis world together.

This interview was held in late July at Canfinder’s Tukwila, Washington headquarters.

BlazingWashington: What was Canfinder’s main purpose when launched and how has it evolved?

Spencer: Canfinder’s parent company originally provided hydroponic supplies for growing cannabis for medical patients. We wanted to bridge the gap with information for medical patients and those who use recreationally. The app was originally set-up to document store locations and products that could be found on the shelves.

In addition, Canfinder wanted to create a digital space to teach people how to cultivate on their own while giving a platform for medical growers to communicate to enhance the community and sharing of cultivation knowledge.

We also launched a social feed to help bring the Washington industry together. Our feed has expanded to other states and we enjoy visitors from all over the country. Enhanced business functions with goals to facilitate B2B development have been added along the way.

BlazingWashington: I first learned about Canfinder at Cannacon 2017. I was really impressed by the effort the company was putting into marketing and the immense value Canfinder brings to both businesses and lovers of cannabis. In 2017 you held a series of events, how did the year evolve for you?

DJ: 2017 was amazing, we were extremely active in marketing the app and creating a positive community both on the app and through live events. After Cannacon we did an event in Vegas and many more around the Seattle area.

BlazingWashington: We went on an adventure on the cannabis bus into the backcountry to the filming of a YouTube show with Lil Nate Dogg. That was an interesting experience, how was that event for you?

DJ: That event was an eye-opener as it was the first cannabis video I have seen filmed. It was quite the experience and a motivating factor to getting involved with cannabis-related video production down the road.

BlazingWashington: What is the Tap In all about?

Spencer: The Tap In was a series of events in Seattle held in conjunction with Flight Head Trips. Rapper Larry June performed at the Tap In 3 party, Nacho Picasso made a guest appearance with IllxChris as the host of the event. Many clothing and other types of artists displayed their works.

BlazingWashington: You guys really seem to enjoy what you do, what is your background in cannabis?

Spencer: I first started to smoke cannabis in the late 90’s and became interested in getting involved in the industry. I’m very happy to find myself at Canfinder almost twenty years later.

DJ: I started to work for a grower in 2014 and the opportunity to work on the media side of the industry has become a dream come true.

BlazingWashington: What is next for Canfinder?

DJ: We have a production called Behind the Greenery on our Instagram feed on Thursdays at 1:20 Pacific, 4:20 Eastern. We will be launching another extensive show on other platforms in the near future.

Download the Canfinder app and join the community, learn about upcoming events and product releases.