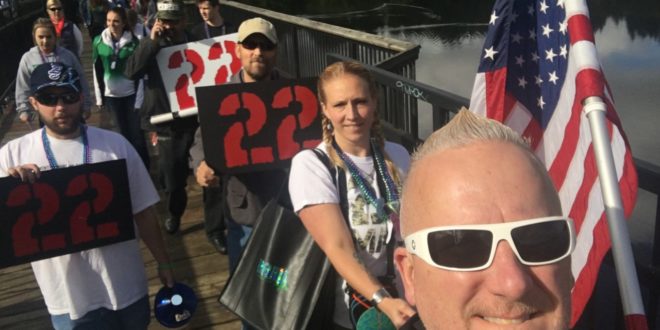 Last year at a cannabis event in Oklahoma, BlazingWashington had the pleasure of meeting Twenty22Many founder Patrick Seifert. Throughout the next year, BW and Twenty22Many bumped into each other at countless events. With each meeting a broader understanding of the importance of the mission of this non-profit organization was developed.

In mid-October BlazingWashington made the trip down to Twenty22Many HQ in Olympia. Weekly meetings are held at the HQ and walking into a meeting in progress was an interesting experience.

Twenty22Many was launched in 2012 after Patrick read an article about statistics of twenty-two veterans a day committing suicide. In fact, over 80,000 veterans have committed suicide in the last decade, more deaths from all U.S. wars combined since the beginning of the Vietnam War.

At the time Patrick, a former Marine, and his wife were the owners of Rainer Xpress, a medical dispensary in the Olympia area. They were seeing an endless line of veterans coming in exploring the use of cannabis to treat PTSD, depression and other medical conditions.

Many veterans were being supplied massive amounts of pills by the VA and wanted to make a change to cannabis. Veterans were fearful of losing their benefits by even discussing the use of cannabis with VA doctors.

At the time, PTSD and TBI were not listed as medical conditions for cannabis. Patrick and many veterans organized and took the issue to the capital. Many tactics were deployed with signs, armbands to show unity, and veterans testifying at hearings. The legislature voted to approve the addition of these conditions to list of medical qualifications.

In addition to activism, Twenty22Many was officially launched as a club to get together to discuss cannabis and learn about how the plant could be used as treatment and grown to lower costs. These gatherings would also serve as a platform to bring veterans together to form a community to help look after each other’s back.

Themed gatherings such as movie nights, yoga, Brazilian ninjutsu, arts/crafts, cruises and much more take place throughout the year.

Veterans can also get $22 medical authorizations. These are needed to legally grow cannabis.

A new program with the organization has a goal to get 8,000 clones to veterans. This represents a year of suicides. Currently there are 37 clones deployed to veterans to help grow their own medicine. Twenty22Many can use clone and equipment donations to expand this program.

Another program is a free ounce a month for veterans at local dispensary Greenlady and up north at Have a Heart locations. This program helps vets on fixed income slash their medicine bill. There is a need to increase this program with more stores throughout the state.

Twenty22Many has helped veterans get out of homelessness and help structure a life of stability. In addition, the organization also helps Gold Star Families, veterans who are sick and collaborates with organizations such as Heroes Promise.

Veteran Steve R. was in the HQ at my visit and I asked what Twenty22Many meant to him. “It gives me cause and purpose, which is something veterans need to help keep negative thoughts from developing. Twenty22Many gives me hope and has helped me get off the street and into an apartment and a job”.

The best thing anyone can do to support is to just show up. By coming to an event and seeing on the ground the work being done helps develop an understanding of why this type of organization is not only needed, but must be scaled to a higher level in every state of our country.

The Blazing Times will dedicate a monthly section to veteran issues and will follow-up in a more detailed interview with Patrick Seifert in a future edition.

Monetary donations and volunteerism are two other ways to help with this cause. Keep your eye on Twenty22Many’s Facebook page for updates on events and sponsorship opportunities.